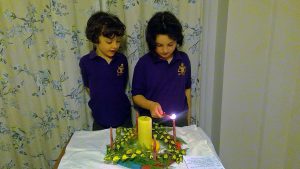 Today is Advent Sunday, the beginning of the Christian season of preparation that leads us to Christmas.  Advent, of course, is about the coming of Jesus.  The Incarnation – historically His coming among us in human form ‘Our God, contracted to a span, incomprehensively made man.’ Charles Wesley’s verse.  Through our faith, He comes into our lives in the present tense.  He will come again!  This, in part, is our Advent hope.

In many ways the thirteenth chapter of Mark’s Gospel is the most difficult chapter in all of the four Gospels. On a personal level, I have found it difficult to express truth for us for today in the set passage.  Apocalyptic writings are concerned with the end-time; cataclysmic events that bring an end to space and time as we know it and usher in God’s heavenly Kingdom and rule.  In the Old Testament the Book of Daniel is one such apocalyptic work.  In the New Testament, pre-eminently it is the Book of Revelation that is written in that genre.  Mark 13 is another example of this form.

Our Lectionary passage takes us to the second half of the chapter.    For the last couple of weeks, in the concluding part of our working through Matthew’s Gospel, we have looked at parables in his Chapter 25, which we discovered were used by Jesus in the teaching of only the group of Disciples.   Early in Chapter 13 we learn that Jesus shared this with an even smaller group – just Peter, James, John and Andrew.  Four fishermen met Jesus on the Galilean Lakeshore, heard his call and immediately responded.  Three years further on, sat on the Mount of Olives and looking across towards the city, that same small group share this last intimate moment with Jesus and hear him speak in different and distinctive tones.

Jesus was in Jerusalem.  Jerusalem, with both its history and the built-in expectations for the future of the nation, was by far the most important location of Jewish faith and its practice.  Within the city itself, the Temple was all-important.  During that last few days in the city, Jesus and His disciples must have been back and forth to the Temple many times.  At the very beginning of this chapter one of the disciples commented on what a fine building the Temple was.    Jesus, steeped in the Old Testament scriptures and standing in the long line of Jewish prophets, was aware of the very real danger that the nation was in.  Rome was a powerful occupying force.  Pushed too far, her patience would snap. World super-powers had brought destruction to the city and death to her people more than once.  Jesus had grown to love the city with its dominant Temple.  He loved her people even more.  The Temple was once again vulnerable.  As was the nation.  Jesus, acutely aware of his own vulnerability in these last days, couldn’t but give warning about what was on the horizon.  He chose to cast that warning in the language of apocalypse.

Our understanding is that Mark was the earliest of the Gospels to be written.  Mark didn’t start with a blank sheet of paper.  Many, many stories of Jesus and stories about Jesus were in circulation.  The Hymn that we used to sing beginning ‘Tell me the stories of Jesus, I love to hear’ must have been a real-life constant demand as congregations met together in the early days of the Church.  Mark attempted to answer that call by collecting just some of the stories and committing them to paper.

Our understanding is that Mark was writing his Gospel, in part based on Peter’s memory and testimony, some thirty or so years after the death of Jesus.  In July AD 64 a fire swept through Rome and destroyed a whole section of the city.  Christians were blamed, scapegoated.  Persecution of Christians and the Church on an empire wide scale began.  Between AD 66 and AD 70, Rome finally became tired of the constant insurrection and seething unrest of the Jewish nation. They laid siege to Jerusalem and finally broke through both the resistance and the walls of the city and took it apart stone by stone. That included the Temple. Jews today honour the last stones left standing by the Roman forces.  The Western Wall (known as the Wailing Wall)– is the last remnant of ‘the wonderful stones and buildings’ Mark 13 v 1.

News of those events must have dominated Mark’s mind and he remembered the warning of Jesus.  Mark wasn’t so much writing about the future as the immediate past or even events in the present.

In ‘our’ part of this chapter, Jesus seems to be pointing to the future.  With quotations from Isaiah, Joel, Zachariah and especially Daniel, He describes a cosmic catastrophe.  A darkened sun, a lightless moon and falling stars herald the coming of ‘the Son of Man’.   Again, a line from a Charles Wesley Hymn – ‘Lo, he comes with clouds descending,’.   Jesus uses the example of a fig tree coming into leaf as an illustration of ‘reading the signs of the times.’

Then comes the telling paragraph.  Over the centuries many people have thought that they had inside information that gave them a precise time and date for the end-time event and the coming of Jesus.  I vividly remember a group of Christians with great urgency gathering on the slopes of Mont Blanc because they had one such prediction.  In each and every case people have been wrong. Even Jesus says ‘I do not know. Only the Father knows.’ Again, a type of parable – this one about the master returning after a journey to watchful servants.  And it is all summed up in a final word ‘Watch!’

That has been a lot of introductory words that lead to the central point that I find in this passage.

Advent is about our hope in the Coming of Jesus.  God is in charge.  His victory is not just promised, it is secure.  He will sum up our history and gather his people. At the heart of that gathering will be Jesus – Saviour and Lord.  We don’t have to adopt apocalyptic language or imagery to hold on to the hope that, in spite of all the distractions and diversions, our faith in God’s purposes and power will not be defeated.  His purpose and power are expressed in His love in Jesus.  That love will never let us go.

At the end of both Matthew’s Gospel and Luke’s there is the command to the disciples from Jesus to take the Good News in to all the world.   From John’s Gospel it is about taking care of one another.  Isn’t it interesting that for Peter, James, John and Andrew there is no last word at what appears to be an unfinished ending to Marks Gospel?  Instead, here at this final meeting of the first four disciples before the events of the Thursday and Friday, a straight command.  ‘Watch!’

Is that a word from Jesus for us in the present tense today?

In addition to the on line Services each Sunday from Salisbury, Bemerton and from Steve, and also in addition to Steve’s daily Morning Prayers, Anna has made the commitment to produce a streamed Evening Compline Service each evening of the week, apart from Sundays, for the whole of the season of Advent.  Compline originated as the last one of the seven ‘offices of the day’ used by priestly and monastic communities before retiring to bed and dates back at least one thousand five hundred years.  It is a lovely gentle Order of Service for the evening based on Jim Cotter’s version and will include his ‘O Antiphone’ for all the days of December.

It can be accessed at: